Welcome to An Indie Adventure, Pamela Turner.  Tell us, what inspired you to write your book  WATCHERS CHRONICLES BOOK 1: ROGUE ANGEL?

Thanks for hosting me, L.A.

I’ve been fascinated by angels for years, including the Grigori (or Watcher Angels), who were said to come to Earth to teach mankind. Only the subjects they taught, including weapons making, cosmetics, even writing, were considered “evil,” and they were punished. I decided to update the Grigori’s roles, putting them in modern settings, such as teaching in a university or owning a gun shop.

Tell us something about yourself we might not expect!

Back in the late 90s, I took a few flying lessons in a Cessna 152. Executed several go-arounds, but never got to solo. My depth perception was too bad. But I still have my books on general aviation. One of these days, I’ll have to create a character who’s a pilot.

Have you been a lifelong reader of mysteries, thrillers, suspense, and horror?  What are some of the first books you remember reading?

Even in elementary school, I loved reading mysteries and horror. I read Nancy Drew, the Hardy Boys, but my favorite series was The Three Investigators. I also read Phyllis A. Whitney’s young adult mysteries. My elementary school library had anthologies such as Alfred Hitchcock’s Supernatural Tales, and one of my favorite stories was by Robert Arthur, although it’s not in the aforementioned book. Anyway, the line (and I’m probably paraphrasing) “She had been beautiful. She was no longer beautiful” is one that has stayed with me all these years.

If you were not a writer, what vocation would you pursue?

Since investigative work fascinates me, I would probably work as a homicide detective, an NTSB investigator, or a postal inspector. Another possibility would be working in cybersecurity.

What is most difficult for you to write?  Characters, conflict or emotions?  Why?

Emotion. I’ve been told I don’t have enough emotion in my stories. I’m a pretty pragmatic person, so I have to make a conscious effort to layer in emotion. Now, if I’m writing a situation that is emotionally charged – such as a main character being shot at – I will, of course, have that character react. The Emotion Thesaurus has been quite helpful in that regard.
What is the first thing you do when you begin a new book?

It’s a multi-step process, and probably overkill, but the first thing I do is input information about my story and characters into a program called Dramatica Pro. It’s a story engineer software that asks questions about your story, then gets it down to one story-form. You identify your main character and impact character and how the story is seen from their eyes, and the inevitable conflict that will occur based on their decisions. Dramatica Pro also helps me tighten my story so I’m not dealing with the dreaded sagging middle that can plague writers.

Next, I go into Scrivener and set up my outline and the major plot points: inciting incident, plot point 1, black moment, etc. I create brief character dossiers and write GMC (goals, motivation, and conflict) sheets for my main characters. Then I start writing the story. 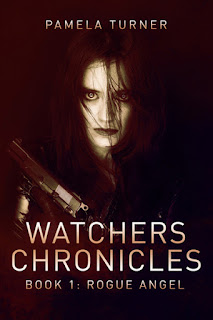 Give us a brief summary of Watchers Chronicles Book 1: Rogue Angel:

Archangel Raguel investigates crimes involving angels. When he inadvertently kills a young woman and her son while trying to apprehend a malevolent angel, he quits his job, unable to justify his actions. But his self-imposed retirement is interrupted when Semyaza, leader of the Watcher Angels, also known as the Grigori, asks him to find Penemuel, the Watcher who taught humans to write, and who has disappeared. Meanwhile, fellow Watchers Azazel and Gadreel, who taught mankind how to make weapons, learn someone is interfering with their gun-running operation on the Dark Net.

As Raguel investigates first Penemuel’s disappearance, then his murder, he finds himself drawn into the world of the Grigori. Semyaza seems to have an agenda, but is it related to Azazel’s and Gadreel’s operation? And what about the mysterious and reclusive Sariel who’s come out of exile for one reason: vengeance. But will his desire for revenge destroy humanity? 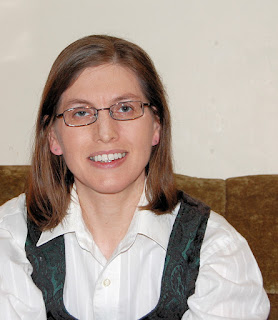 Her short dark suspense story “Family Tradition” was a finalist in the EPIC 2014 EBook Awards. She’s also an award-winning screenplay writer. A member of the national chapter of Sisters in Crime, she’s currently vice-president of the Louisville Chapter. Besides coffee, she likes cats, cemeteries, and old abandoned buildings.