Welcome to An Indie Adventure, Addison Brae. Tell us, what inspired you to write your book, Becker Circle?

Thanks for allowing me to be your guest, Leslie.

A conversation with another author inspired Becker Circle. We were cleaning up after a writing workshop, and I mentioned being in a hurry to make it to my friend’s bachelorette party. “Why someone our age would go to a bachelorette party?” she asked. The response was simple. “My friend’s getting married.” I was at the beginning of a fresh start, and our conversation made me realize how stuck in social norms and expectations we are. The next day, I started a blog that led to this book, which is very much about starting over on your own terms.

How do you use setting to further your story?

Becker Circle is almost an actual character in the story. It’s an urban neighborhood where mostly single people live, work, and play. But it creates a vortex that sucks people into a life of excesses—alcohol, drugs, and sex—and makes them who they are. The neighborhood attracts an eclectic mix of people who walk between their apartments, area office buildings, and neighborhood bars. When Gillian walks through the neighborhood, she sees people she knows. They’ve made her feel welcomed, but how much should she trust her neighbors?

What are some the first books you remember reading?

As a kid, I had piles of books and constantly swiped my older sister’s books. The Anne of Green Gables series was one my first loves because spunky Anne Shirley always overstepped boundaries and questioned the rules. These books inspired me to write contemporary young adult. In my young adult and adult romantic suspense, you’ll always find strong female characters that mess up, learn, and become the hero.

What do you do to rev your creative juices?

Jogging is for recharging. It’s when I tune out the real world, plug in my favorite tunes (on an old iPod, not my phone that’s full of distractions), and mentally step into my characters’ world. I jog in a park underneath 100-year-old pecan and live oak trees with the Dallas skyline as the backdrop. I often think through a chapter or scene while I’m running and write it down later. Recently a dog bit me while I was running, so whenever a dog approaches, it interrupts my Zen place. Hopefully, this will pass soon.

How do you create internal and external conflict in your characters?  I find conflict often the hardest to create when I start planning a book.
Conflict stems from flawed characters—characters that are much like real people. The hero or heroine has goals and makes mistakes achieving them. They face fears, make bad choices, and then have to face the consequences. They interact with evil people (the villains), who also have their own agendas. My favorite part of writing is when the heroine and the villain face off. Both will do anything to achieve their goal. It’s conflict that goes beyond 11 that hopefully will keep readers turning pages.

What is the first thing you do when you begin a new book?


I think about the characters for an eternity before I write anything down. The first thing I type is a short synopsis so I know there’s an interesting plot the cast of characters in my head can play out. Then I start writing. 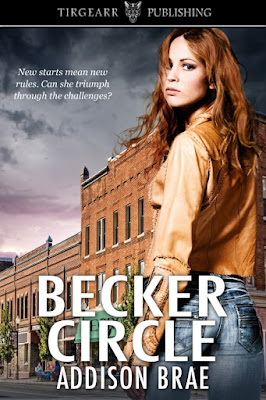 Give us a brief summary of Becker Circle:

My first and only boyfriend believed I was too gutless to leave. He was dead wrong. My name’s Gillian, and I graduated Harvard early and left his hot temper and everyone else behind for Dallas. Determined to make it on my own, I land a second job bartending at the neighborhood pub smack in drama central where most every jerk in the neighborhood hits on me—at a huge price.

A week into the job, the neighborhood’s very popular drug dealer falls to his death a few feet from the table I’m serving. The cops say suicide, but the hot guitar player in the house band and I suspect foul play, and I intend to prove it. We dig deeper, grow closer, and make a shocking discovery. We know the murderer. Watch the trailer.
Buy:
Amazon| B&N | Smashwords 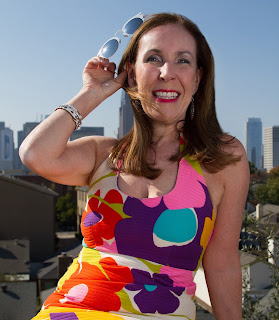 Bio:Addison Brae lives in Dallas, Texas on the edge of downtown. As a child, she was constantly in trouble for hiding under the bed to read when she was supposed to be napping. She has been writing since childhood starting with diaries, letters, and short stories. She continues today with articles, video scripts, and other content as an independent marketing consultant.

When she’s not writing, Addison spends her time traveling the world, collecting interesting cocktail recipes and hosting parties. She’s still addicted to reading and enjoys jogging in her neighborhood park, sipping red wine, binge-watching TV series, vintage clothing and hanging out with her artistic other half and their neurotic cat Lucy.