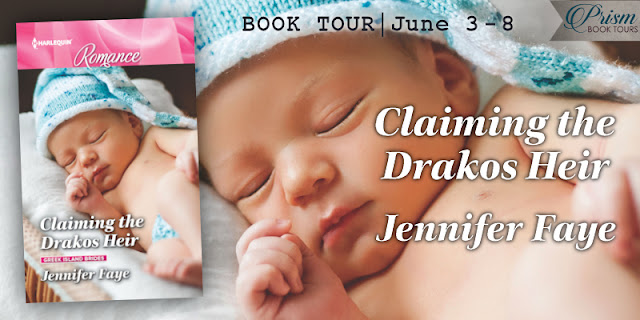 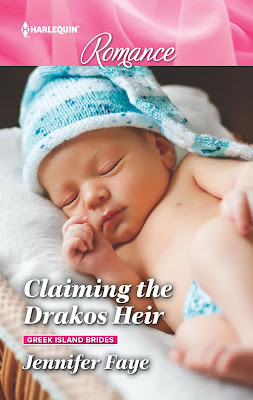 
The rebel bachelor is back…

To claim her baby!

In this Greek Island Brides story, pregnant surrogate Popi Costas is faced with raising her late sister’s child alone, until the baby’s wealthy uncle arrives to take charge! Apollo Drakos is distractingly handsome, but Popi won’t let that stop her from fighting to keep the baby. Yet as she gets to know the man behind the wild card reputation, Popi’s reconsidering welcoming Apollo into her new little family…

Excerpt:
He didn’t want to be here.

But on this small island, places to wait for Popi were limited. And the wedding appeared to be taking place in a common area of the village.

Apollo found himself standing off to the side. No one seemed to make a big deal of him being there. They acted as though he was just another wedding guest. Some even shook his hand and greeted him.

Up until now, Apollo had done nothing but make one mistake after the next since the day he was born. He thought he’d have time to fix things—to change his ways. After all, he was young. There was plenty of time to make up for the past, but then suddenly out of nowhere he’d been blindsided when time had run out for Nile and his wife, Andrina. And now he owed it to his brother not to mess things up where the baby was concerned.

As he thought of Nile, the breath hitched in Apollo’s throat. It wasn’t supposed to happen this way. He was the adventure seeker—the daredevil. If something bad had to happen, it should have been to him. Not his brother. None of this made any sense.

A flurry of motion drew Apollo from his thoughts. The wedding guests took their seats. Not wanting to stand out any more than he already did with his casual attire, Apollo took a seat in the back. The classical music started. Two pretty women started up the aisle.

And then Popi appeared at the end of the aisle, holding a bouquet of teal blossoms. She looked radiant. Her smile lit up her whole face. All he could do in that minute was stare at the most beautiful woman he’d ever seen in his life. It was the same sort of stunned reaction he’d experienced at her place, when he’d found her in the very short, very revealing pink robe. He couldn’t decide which look he preferred on her. Both looks had their alluring qualities.

It was in that moment her gaze lifted, meeting his. The breath caught in his chest. Her big brown eyes were mesmerizing. He felt as though he were being drawn into her chocolate-brown depths. His heart beat faster, as time felt as though it had been suspended.

She was looking right at him as she stepped forward. His mouth grew dry. He should turn away, but he couldn’t. She was amazing in every way. 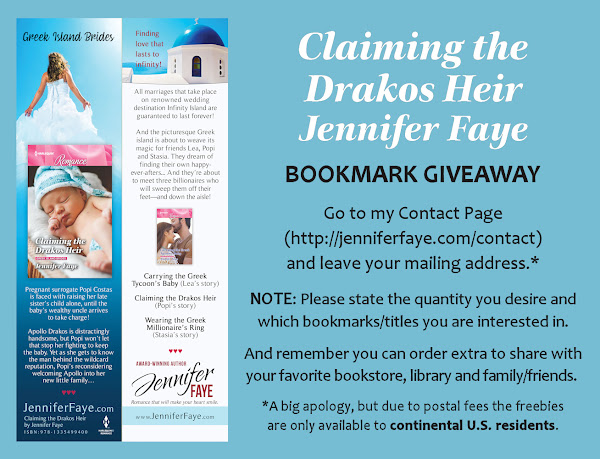 Go to Jennifer's Contact Page HERE and order your bookmark(s)!


Finding love that lasts to infinity!

All marriages that take place on renowned wedding destination Infinity Island are guaranteed to last forever!

And the picturesque Greek island is about to weave its magic for friends Lea, Popi and Stasia. They dream of finding their own happy-ever-afters... And they’re about to meet three billionaires who will sweep them off their feet—and down the aisle.

Follow Lea’s journey from surprise pregnancy to dream proposal in...

In this Greek Island Brides story, for jaded tycoon Xander Marinakos, renowned wedding destination Infinity Island is just another opportunity to expand his empire. Until he’s captivated by its beautiful owner, Lea Romes… When their one night together has unexpected consequences, Xander must negotiate the deal of a lifetime, and put his guarded heart on the table to convince independent Lea they can be a family…for infinity!

In this Greek Island Brides story, widow Stasia Marinakos is learning to enjoy life again aboard a Mediterranean cruise. Her chemistry with gorgeous Greek tycoon Roberto Carrass is a pleasant surprise—until she’s mistaken for his fiancée! Nevertheless, the guarded bachelor asks Stasia to continue the charade to stop his family from matchmaking. As their attraction grows, their fake romance feels ever more real…but what will happen when the vacation ends? 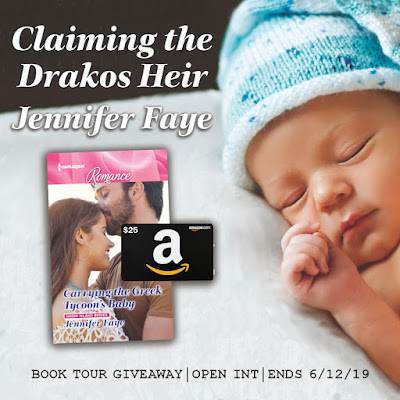 1 winner will receive a copy of Carrying the Greek Tycoon's Baby (print if US, ebook if INT) and a $25 Amazon eGift Card.
Open internationally
Ends June 12, 2019