How do you use setting to further your story The Black Hand: Arsonist?

Thanks for hosting me, L.A.

It’s something I know and have lived for the last 20 years and will do so until I am physically unable to climb up on the fire apparatus. To have experienced what the feel the heat of a fire with your breath rasping through a SCBA despite the protection of a great deal of very expensive equipment and years of training and experience is something very few people know.  And to have witnessed what a fire, EMS, rescue or extrication scene sounds like, looks like and feels like to the smells, sounds and nightmares to follow.
How is your main character completely different than you?

I was two classes away from a minor in Chemistry but I couldn’t get past the infamous Inorganic Chemistry classes of shattered souls.  Organic Chemistry is so much easier, just look for the carbon molecule and everything is revealed. As an aside, I have spent twenty years as a volunteer firefighter and that often comes in handy in some of the many classes I’ve taken over the years in correcting the instructor multiple times during a class about making meth and how the fire service should deal with it to the point where he wanted to throw me out.

Tell us something about yourself we might not expect!

My day job is as an International Arms Dealer. I work for a defense contractor and facilitate international arms sales including generating sales orders, helping fill out reams of paper all the way to building weapons and packing them to go to other countries. No, it doesn’t involve travels to exotic places of danger but the most I face is papercuts or dropping a ream of forms on my foot.  I also sell men’s clothing as a part-time job.

What do you do to rev your creative juices?

Step back from a piece of work and let my subconscious figure out what and how I’m going to solve the problems I’ve tortured my characters with. Read books in a different genre, do laundry and work around the house and suddenly an idea or two pops into my head. I also listen to my dreams during sleep to know that I would have answers when I wake up in the morning. I also am always indebted to my lovely life who works with me on everything I’ve written—sometimes as a writer, you get so immersed in a story that a new perspective helps on what I’m trying to figure out.

If you were not a writer, what vocation would you pursue?

I cannot imagine being anything except a writer. I can’t paint/draw worth a darn so telling stories is what I do. I’m Irish which means story telling is in my genes. I love too strongly, live life on the edge, work too much and tell stories. My longtime dream job as a paramedic is no longer something I can do because of physical limitations—it’s a job for the younger generations but I’ve done the best I can to make sure that those who follow me will be the best that they can be.

If you were a TV, film or book character, apart from one you've created, who would you be?  And why?

Thomas Magnum. Living in paradise, driving a Ferrari, taking down bad guys and has been an SEAL. He lives by his ideals and wears his heart on his wrist—a POW bracelet. 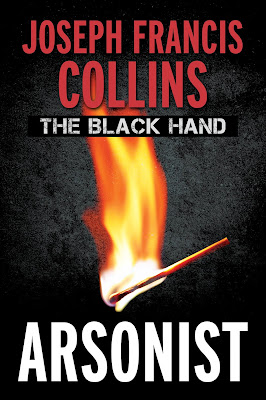 Give us a brief summary of “The Black Hand: Arsonist”:
The Black Hand...
A shadowy organization that recruits, trains and supports assassins who specialize in unique methods of murder.

A Talent for Chemistry
Mathew Tudor had just earned his PhD and was working a dead end job when The Black Hand approached him about a life altering career change.

A New Career
He was in too deep before he learned that he'd been hired as an arsonist.  He'd already sold his soul to The Black Hand and saw no way to get his freedom.

The Future
His training end with a final test—a massive arson fire so dangerous that it might kill him. With luck, skill and determination, he might just survive his time as...
The Black Hand: Arsonist 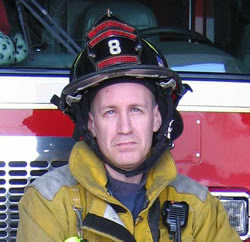 Joe Collins is a 20 year veteran on the busiest volunteer fire department in the county and a 20 year veteran of EMS and now retired Critical Care Paramedic. As an instructor for much of his life, he has taught a wide variety of subjects ranging from Aikido all the way through to EMS and Fire Department subjects.

His most recently published books are in “The Black Hand” series including “The Black Hand: Arsonist.: Currently, he is working on a Military Science Fiction series.